Significant Object believes in putting objects on stage and moving them about a bit. Whether they are small, household objects with lives of their own, hulking giants or elegantly designed characters or creatures, we know that they compel and excite an audience in their own way.

We love the extraordinary, and we love to break new ground. Like the time we made a puppet to play the lead role at one of Europe's great opera houses (and streamed to over half a million viewers). Or when we went to Japan with Paul McCartney. When we helped design and animate a god to fill the stage at the Royal Shakespeare Company. A performance with imaginary puppets at the O'Neill puppetry conference. A crocodile on a tricycle in Zürich. A giant dragon that disrupts a city and then, actually, really flies. Joey from 'War Horse' on the roof of the National Theatre, or in virtual reality. If you want help to make something impossible happen, come and talk to us about it. We love interactive, responsive, detailed art.

Please visit our Facebook page to find out more. 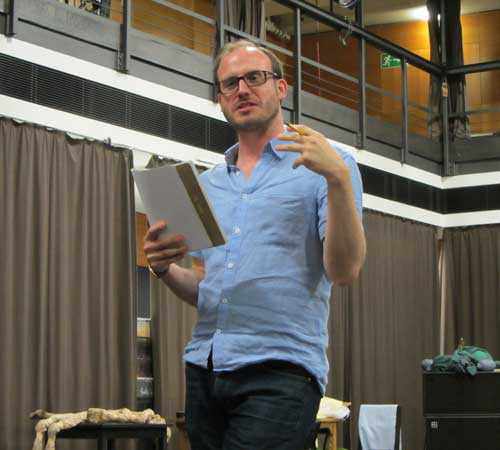 Mervyn is a Creative Associate for the National Theatre's War Horse, having been involved in the creative team since its inception and directing casts in London, New York, Toronto and Berlin. He was Artistic Director of Handspring UK and has a longstanding association with Handspring Puppet Company in Cape Town. For Handspring, he has directed Crow, co-directed Stiller (at the Bayerisches Staatschauspiel) and Jubilee Salute (at the National Theatre London), was Assistant Director on Tall Horse and appeared in Or You Could Kiss Me and War Horse.

He has a hatful of other puppetry design and direction credits over twenty years of work, taking in the RSC, the Strasbourg Opera, The Royal Court, the Young Vic, the Bolton Octagon and the National Theatre, amongst many others. Awards include a Herald Angel Award and a Total Theatre Award (both for his collaboration with Kazuko Hohki, Evidence for the Existence of Borrowers). In 2010 Mervyn was awarded an Arts Foundation Fellowship.

Mervyn has written three books on puppetry, Puppetry: How To Do It, Journey of the Tall Horse and The Horse's Mouth.

In 2015 he made a TEDx talk about puppetry and the imagination:

Tracy has a background in theatre design, and fabrication of puppets, costumes and props. Her puppet designs with us include Circus 1903, work for Handspring UK's Crow, James II with the National Theatre of Scotland and our Rubicon Mangoes project.

Her other work includes Trigger Happy TV, wireframe's The Lusiads, and for the RSC and numerous commercial clients. Ed has a background in design and making for film and stage. His puppet designs include work for Handspring UK's productions of Crow, co-design of Newman and all of the puppets for Stiller.